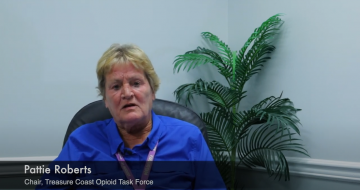 Pattie Roberts currently serves as Deputy Director for the City of Port St. Lucie Parks & Recreation Department. Pattie has worked for the City for more than 13 years, serving in many roles. Pattie is an advocate of volunteerism and was instrumental in the development of the City of Port St. Lucie Volunteer Program in 2009. Pattie and her husband Terry have been married for 40 years. On August 18, 2018, Pattie and Terry’s son, Danny, died due to an opioid overdose. Danny had fought and struggled with addiction for eight years before losing his battle. Pattie is a staunch advocate in the field of substance abuse disorder to eradicate the stigma associated with this devastating disease.