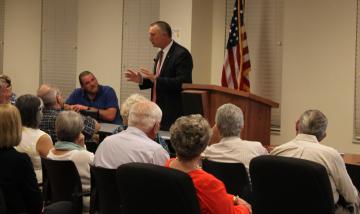 More than 100 people filled the Jury Assembly Room at the St. Lucie County Courthouse in Fort Pierce on the evening of February 21, 2017 for the first night of the Your Courts Up Close program. This is the first time that the program has been held in the 19th Judicial Circuit, however St. Lucie County Court Judge Daryl Isenhower, who developed the program, would like it to become an annual event in the Circuit. The program is a free, four-night event. Judges and guest speakers address various topics related to the courts and the criminal justice system. On its first night, the bar for guest speakers was set high with Chief Judge Elizabeth A. Metzger and Chief Assistant State Attorney Thomas Bakkedahl making presentations. Chief Judge Metzger provided an overview of the Florida State Courts System, as well as a thorough description of the 19th Judicial Circuit and its Judges. The presentation was the perfect way to start the program as it provided an understanding of our court system. Mr. Bakkedahl provided a description of the State Attorney’s Office and how decisions are made in regards to prosecuting cases. Additionally, he spoke of the State Attorney’s Office use of grand juries in the 19th Judicial Circuit. Judge Isenhower was the host for the program and facilitated the question and answer period after each guest speaker. The next Your Courts Up Close event will be Tuesday, February 28, 2017 and will focus on specialty courts.